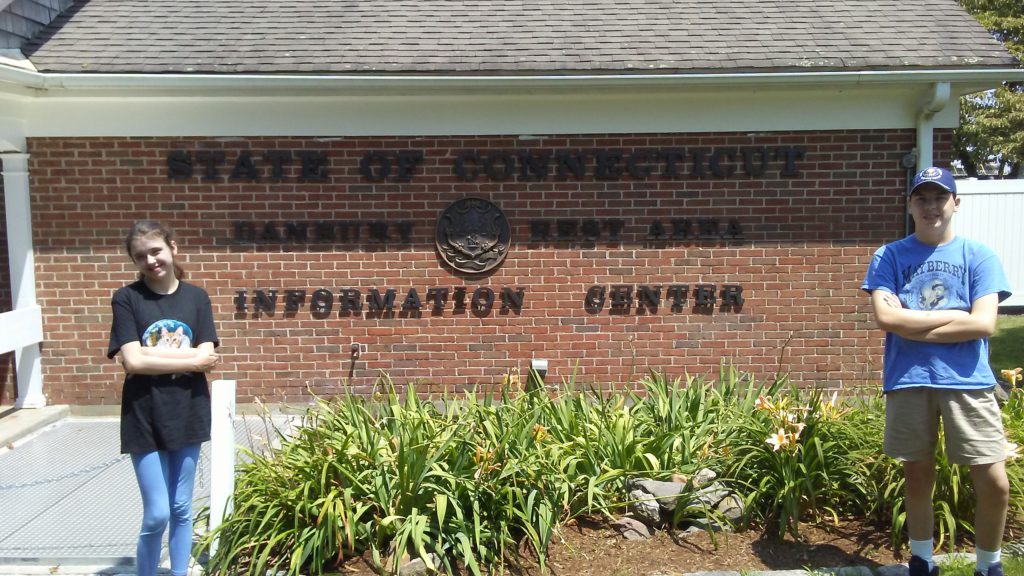 After we left Staten Island, we began a two-week road trip through New England. We started in Windsor Locks, Connecticut. From there we went to Rhode Island, Massachusetts, Maine, New Hampshire and Vermont. The weather was great (it felt like fall in Texas), traffic was great in some places and really terrible in others, the scenery was beautiful, and the people were friendly. There are a lot of toll roads, but we figured out how to get around a few of them (driving off the beaten path is fun if you have the time). Our New England summer road trip was a first for all of us and we had a great time. 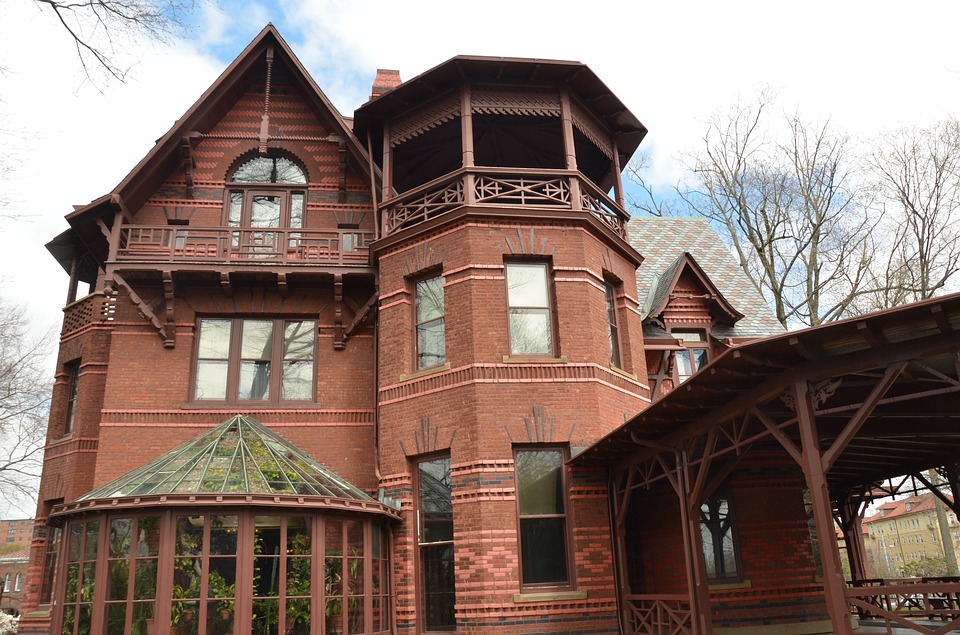 Windsor Locks is located just north of Hartford, but we chose a hotel there because of its proximity to a small town called Tolland. I have ancestors from Tolland that I wanted to do a little research on. Lack of time and lack of accessible records going back that far messed up my plan, but that’s okay. It’s a nice area and we enjoyed our stay.

Windsor Locks isn’t a big town, but there are fun things to do nearby. Here are a couple of examples. 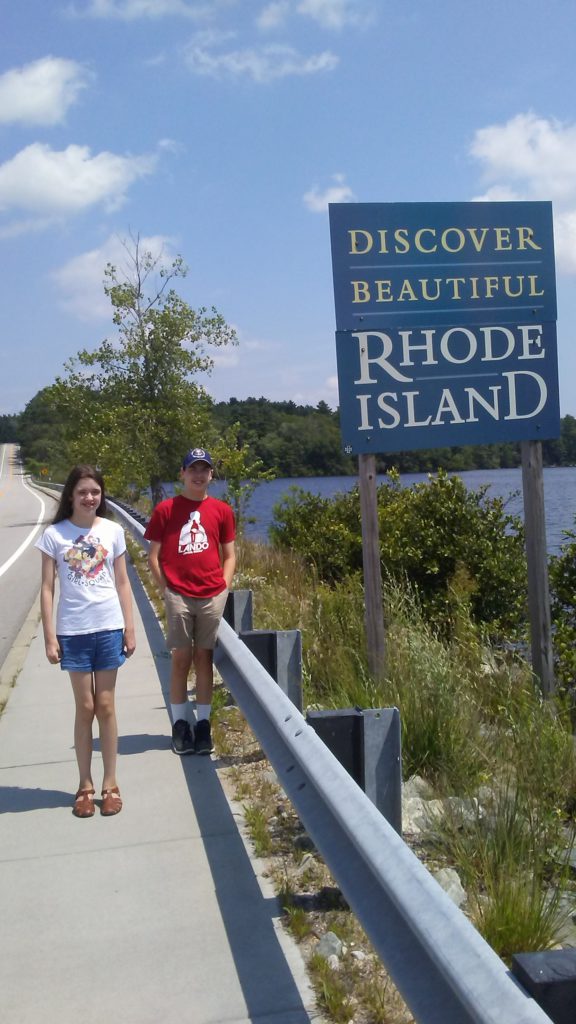 We enjoyed our time in this cute, peaceful little town near Newport. We stayed at a Fairfield Inn, which I was so happy to find. While planning this trip, I couldn’t find anything available in Rhode Island in our price range. I spent months looking. We almost went camping. Then, right before we left, I checked one more time and this room had opened up. I was so excited!

We wanted to visit the beach and cliff walk so we drove over the Newport Bridge, which cost $4.00. We paid $15.00 for parking at Easton Beach. There were a lot of people there, but the beach is long enough that it was still easy to find plenty of space to ourselves. The water looked really dirty, but when we walked a little further down it started looking better. We had a nice time, but we all agree our favorite beach so far has been Foley Beach in Charleston, SC. After we got out of the water, we took a walk along the paved section of the cliff walk. 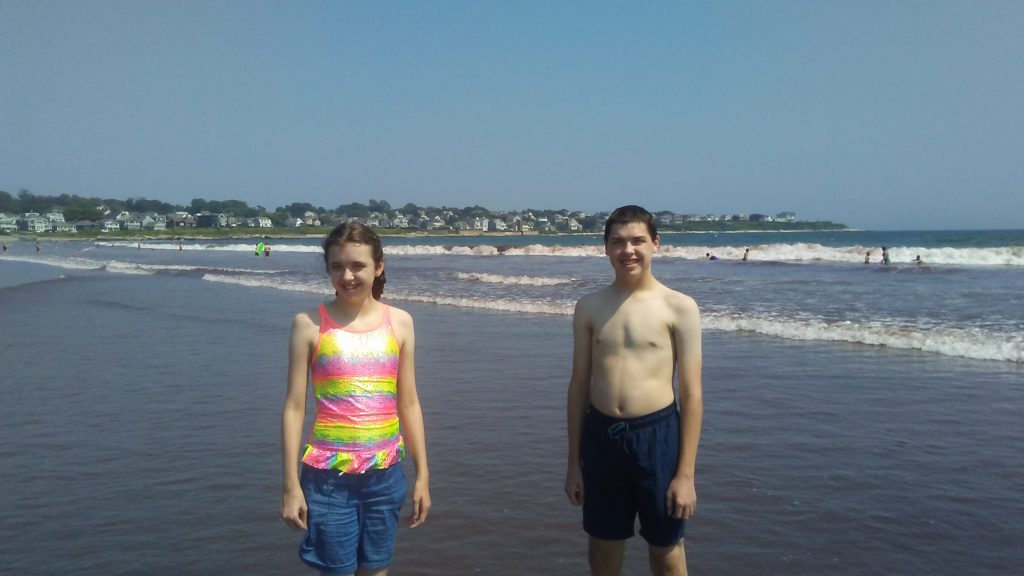 A lot of wealthy people live in Newport and you can see their mansions along the shore. I heard Jackie Kennedy’s family had a home there when she was growing up.

We wanted to try something local for lunch. There are a ton of expensive seafood restaurants around there, but we wanted more of a casual dining burger place. We found our answer in Newport Creamery. We had a delicious meal, which we followed up with an Awful Awful shake (which seems to be popular with the locals). 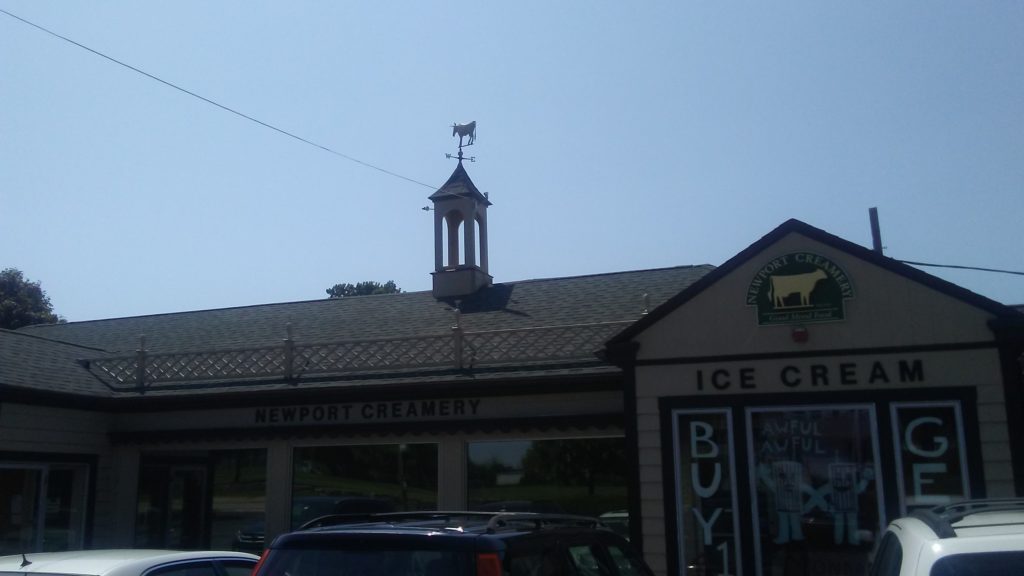 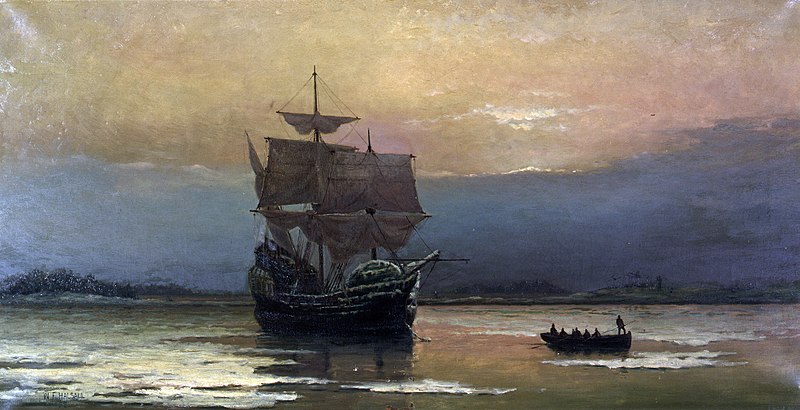 Like most people who have grown up in the United States, we’ve heard the story of the Mayflower and the Pilgrims our entire lives. From an early age we learned about their arrival in 1620 and about the famous rock that marks the spot where they landed. Every Thanksgiving we would hear about the Pilgrims and Indians coming together for what is commonly referred to as the First Thanksgiving. 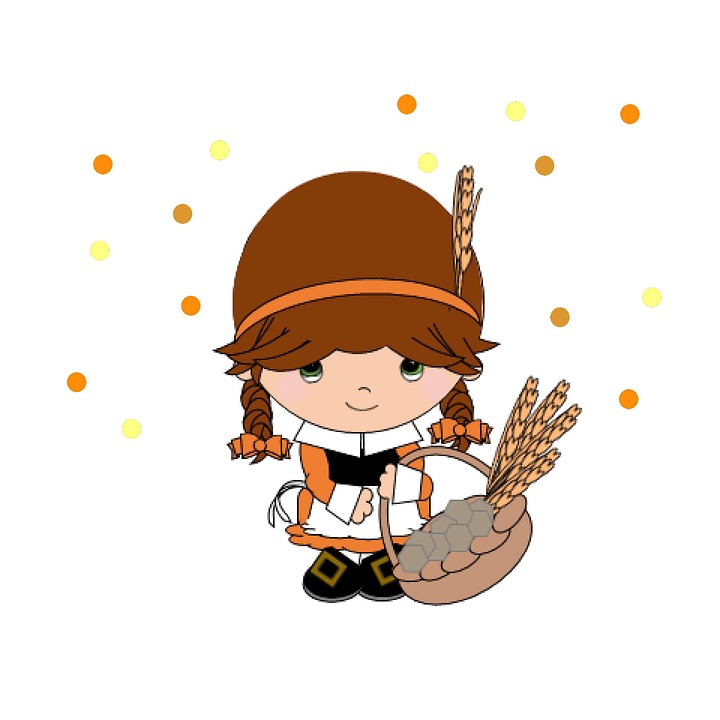 We found modern day Plymouth to be a really cute town that has done a lot to honor their special place in history in a way that’s not tacky, like a Mayflower amusement park or something. It’s just a nice, historical place. It’s definitely worth paying a visit at least once. We visited the Pilgrim Hall Museum, Plymouth Rock, and Burial Hill. 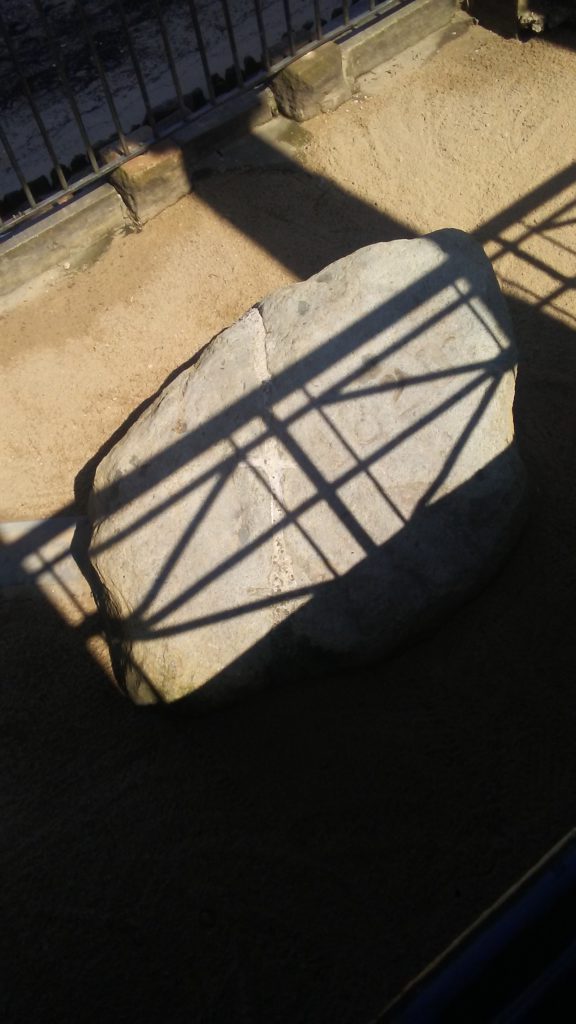 I loved being able to share that experience with our kids and I probably spent way too much money in the museum gift shop. It’s extra special to us now because several years ago I found out I have Pilgrim ancestors. As someone who loves family history and as someone who loves American history, I geeked out pretty hard. 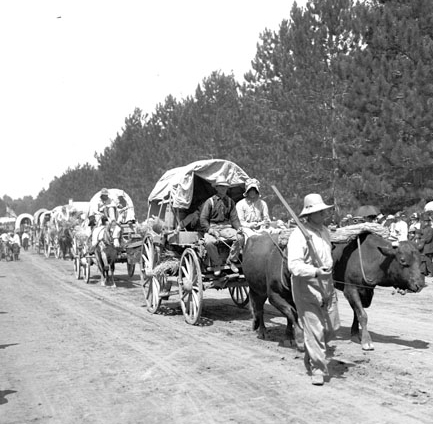 In 1813 the Rawdon and Winslow families of Tolland, Connecticut packed up and moved to Windsor, Ohio. The group consisted of Samuel and Abigail (Winslow) Rawdon, Abigail’s parents Stephen and Elizabeth (West) Winslow, Abigail’s brother West Winslow and his new wife Lois, Samuel’s brother Erastus and his wife Mary. There were also 14 children in the group (9 belonging to Samuel and Abigail and 5 belonging to Erastus and Mary). Their 3rd child, Stephen Winslow Rawdon, was 10 years old at the time of their big move. He is my 4th great-grandfather. 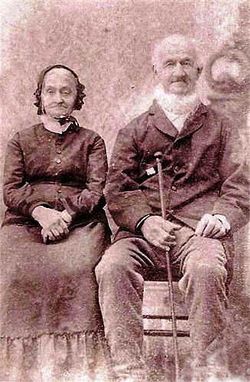 After he became an adult, Stephen Winslow Rawdon eventually moved to Wisconsin. He married Lovisa and had 13 children. Their youngest child was Stephen Ezra Rawdon, my 3rd great-grandfather. The family kept making their way further west. Stephen Ezra Rawdon eventually ended up in Minnesota. He also had a large family, with his wife Frances. Their son Charles Henry Rawdon is my 2nd great-grandfather.

Stephen Ezra and Frances eventually ended up in the state of Washington, where they lived the rest of their lives. Charles Henry stayed in Minnesota, married Lillie and had six children. Their fourth child, daughter Olive Rawdon, is my great-grandmother. When Olive was still just a child, Charles and Lillie moved their family to North Dakota. 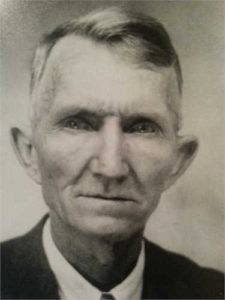 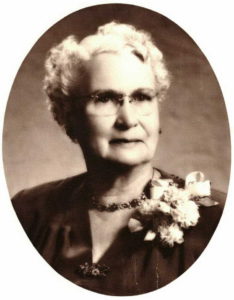 Olive later married a man by the name of John Howen. They had 8 children and lived on a farm near Lakota, North Dakota. Then tragedy struck. Olive died of a ruptured appendix at the age of 32, leaving behind her husband and 8 children between the ages of seven and fifteen. Their 3rd child, Margaret, was 12 years old when her mother died. Margaret is my grandma. 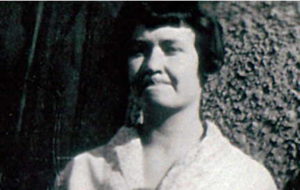 Olive Rawdon Howen in the only picture of her known to exist.

Olive’s family moved to Washington, where Charles parents had moved all those years earlier. They stayed out there the rest of their lives. Margaret grew up, got married and had six children, one of whom is my father. Eventually my family ended up in Illinois, Kansas and finally Texas. Since grandma was so young when she lost her mother, and the family moved away, we never knew a lot about that branch of the family tree. 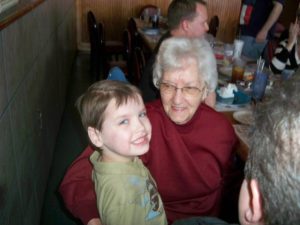 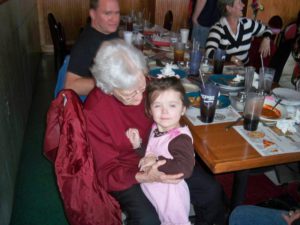 Grandma died in 2011. A few years later I started researching her mom’s side of the family. During that process I found out about my Rawdon and Winslow ancestors who moved from CT to OH in 1813. Then I found out that, through them, I have pilgrim ancestors. William Bradford is my 10th great grandfather, John Howland and Elizabeth Tilly are my 10th great grandparents and Richard Warren is my 12th great grandfather. Elizabeth Tilly’s parents, John and Joan (Hurst) Tilly were also on the Mayflower (they came over with their daughter when she was 12 years old, but they both died that first winter). In addition, Edward Winslow is my 11th great-uncle (his brother Kenelm is my ancestor). 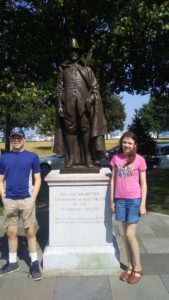 Joshua and Katie next to statue of Governor William Bradford – their 11th great grandfather. 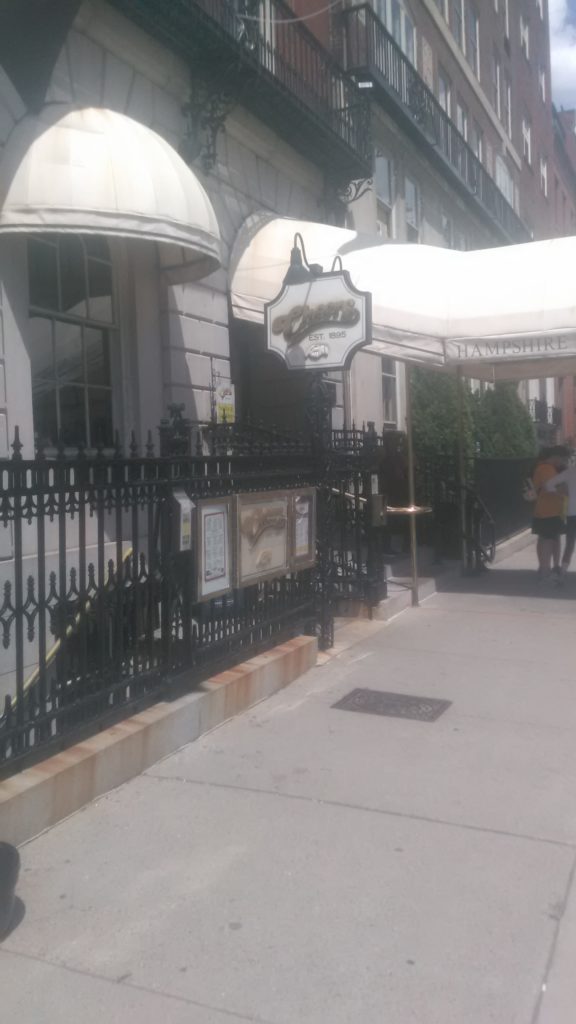 The outside of Cheers doesn’t seem to have changed at all since the show was on. If you’ve watched the show you will remember how the characters went down the steps and the door to Cheers was to the right. In real life the door is straight ahead. 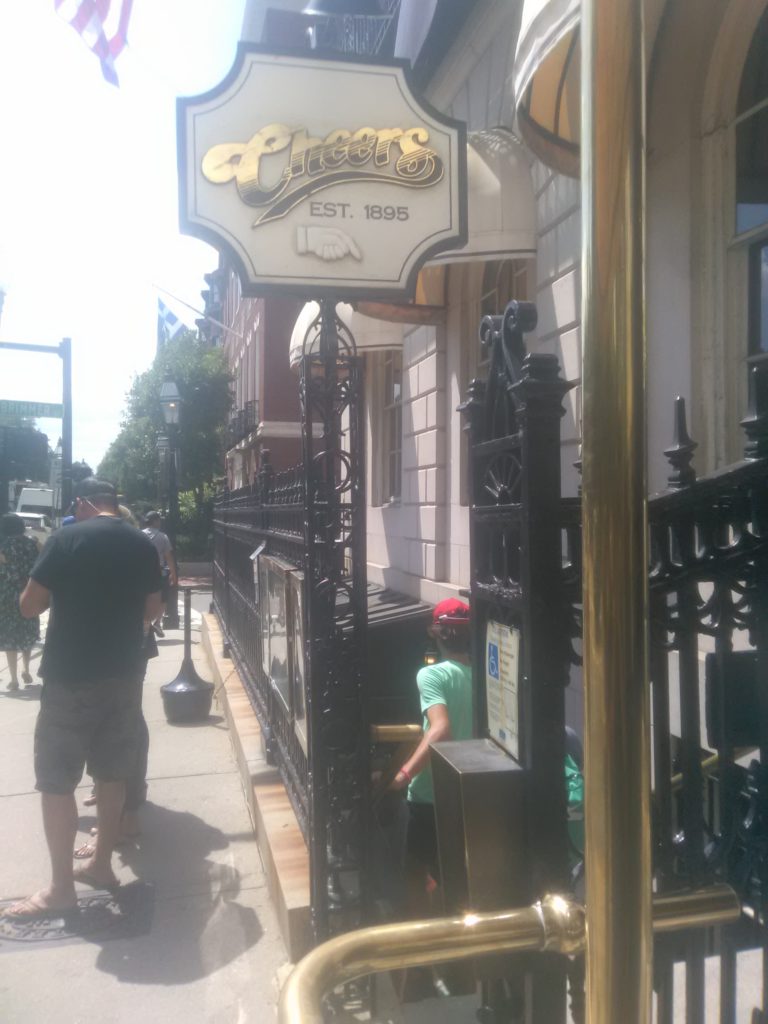 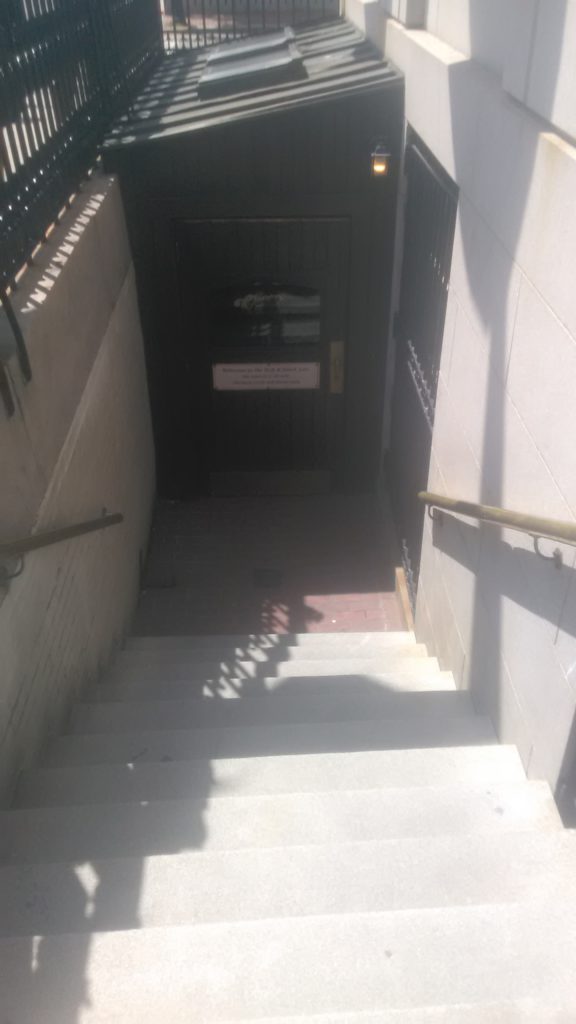 There is a restaurant and bar inside, but after looking at the menu posted outside, we knew we wouldn’t be having lunch there. Joshua wanted the “Norm Burger” but for $19.00, George Wendt himself would have to deliver it to the table before we would even consider it. 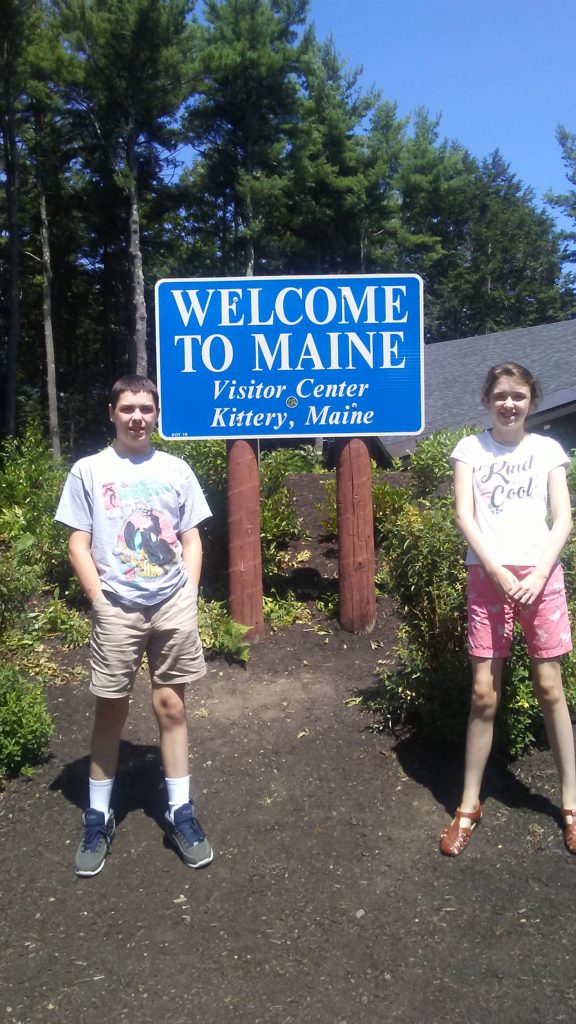 For as long as I could remember, I wanted to visit Maine at least once in my life. It was so far away that it almost seemed unreachable as a road trip. So our visit to Maine was one of the parts of our trip I was looking forward to the most. 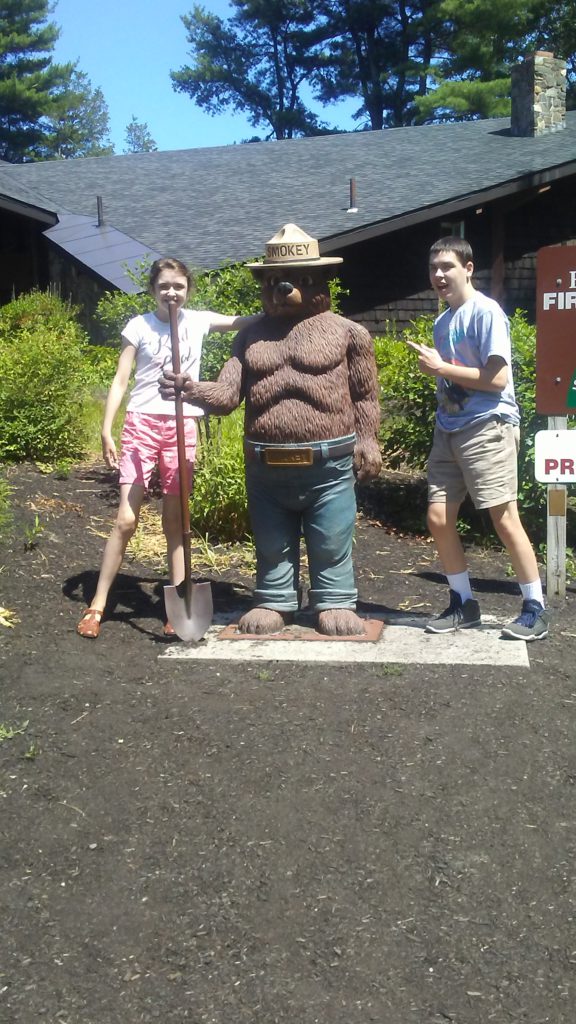 One of the first things we noticed were all the signs warning us to watch for moose in the road. I became giddy at the thought of seeing a real life moose (from a safe distance) that it became my mission the whole time we were there (unfortunately, that wasn’t to be).

We stayed at an Airbnb which was on a horse farm. It was so peaceful and such a welcome change from the big city things we had done previously. 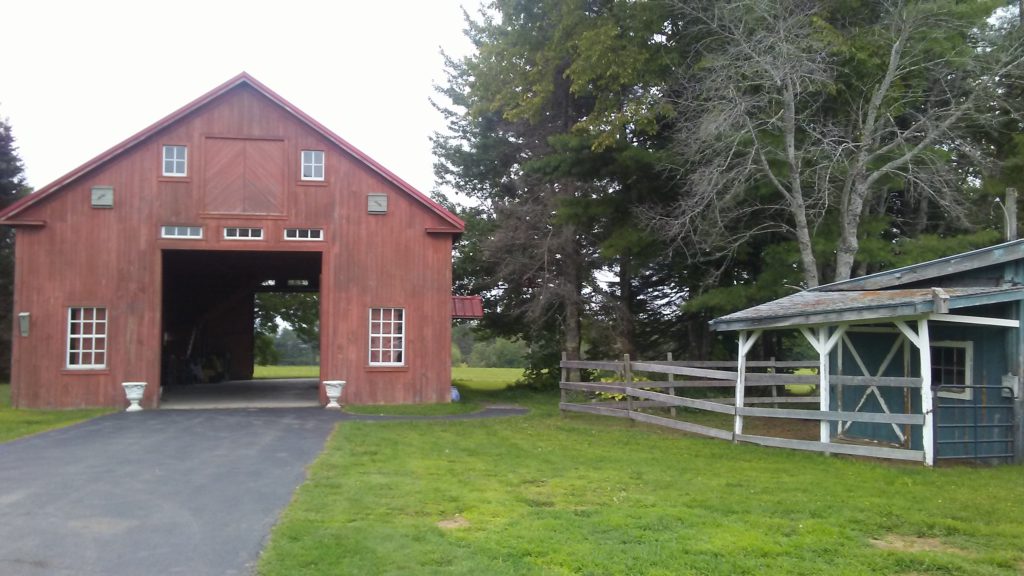 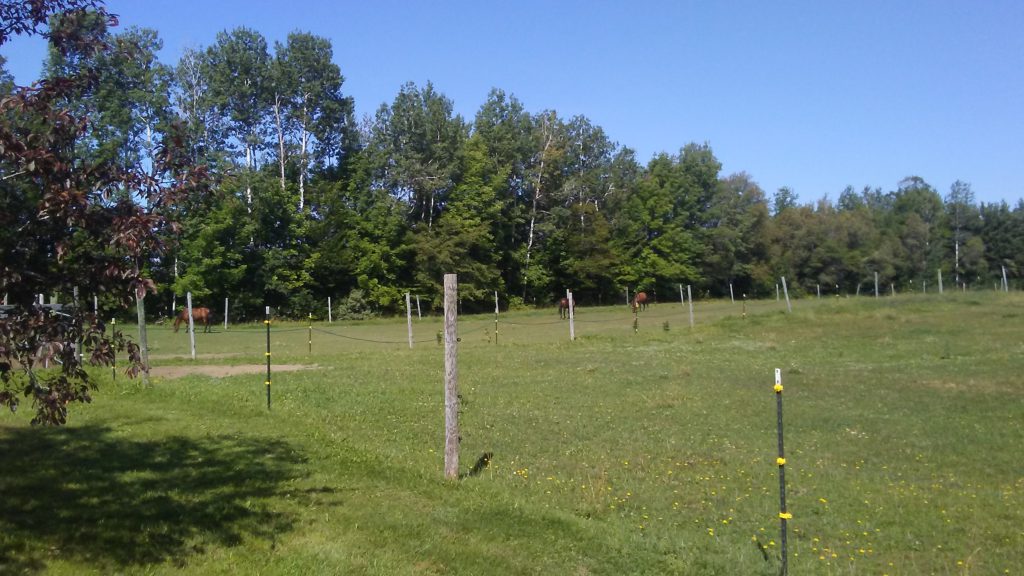 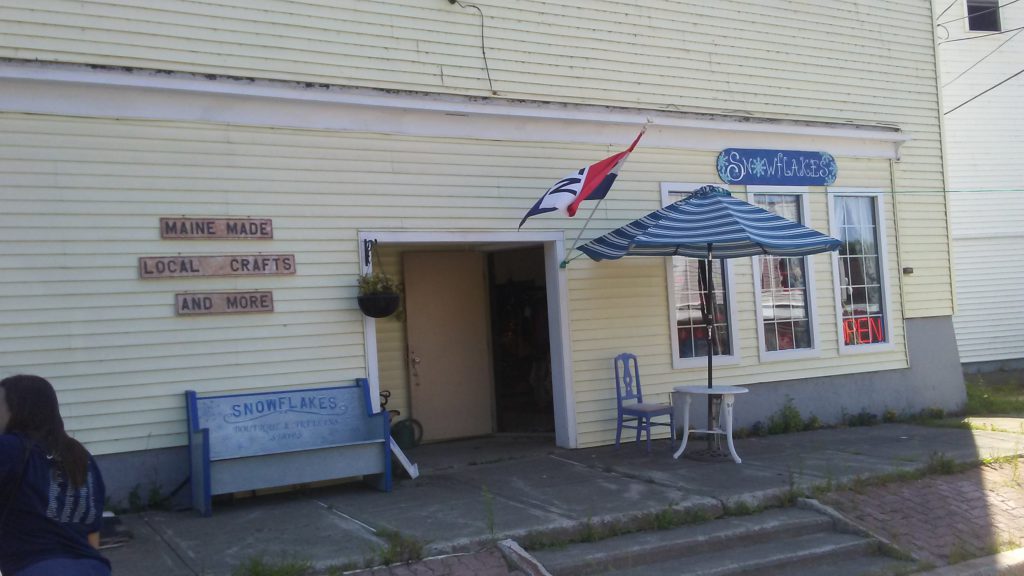 When we weren’t looking for moose, we went antiquing. 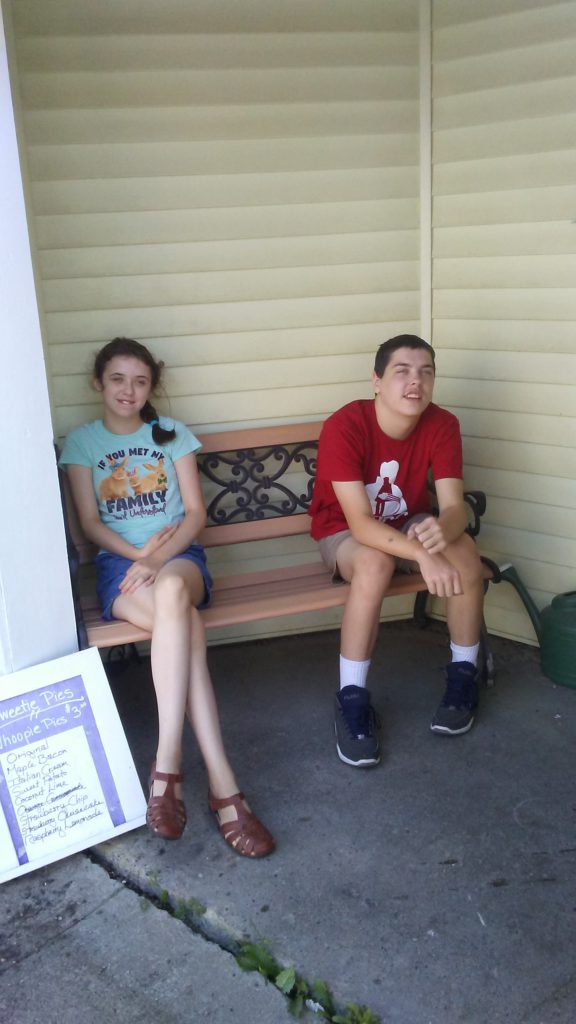 Kids waiting outside a store. For them, “antiquing” is not a verb. 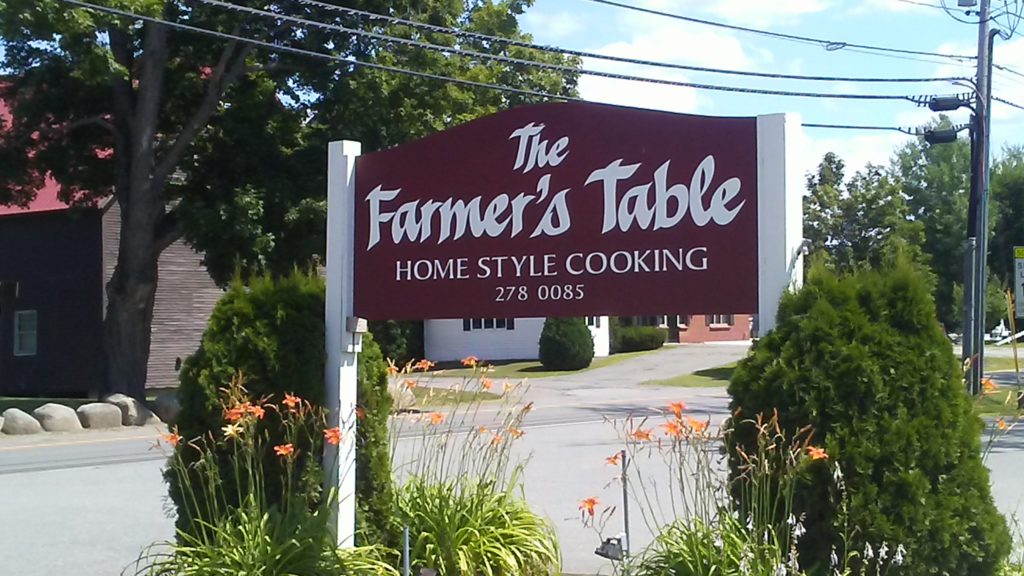 We had lunch at this great local restaurant called The Farmers Table in Corinna Maine.

We didn’t visit any tourist attractions in New Hampshire or Vermont. We just enjoyed nature and the scenery. 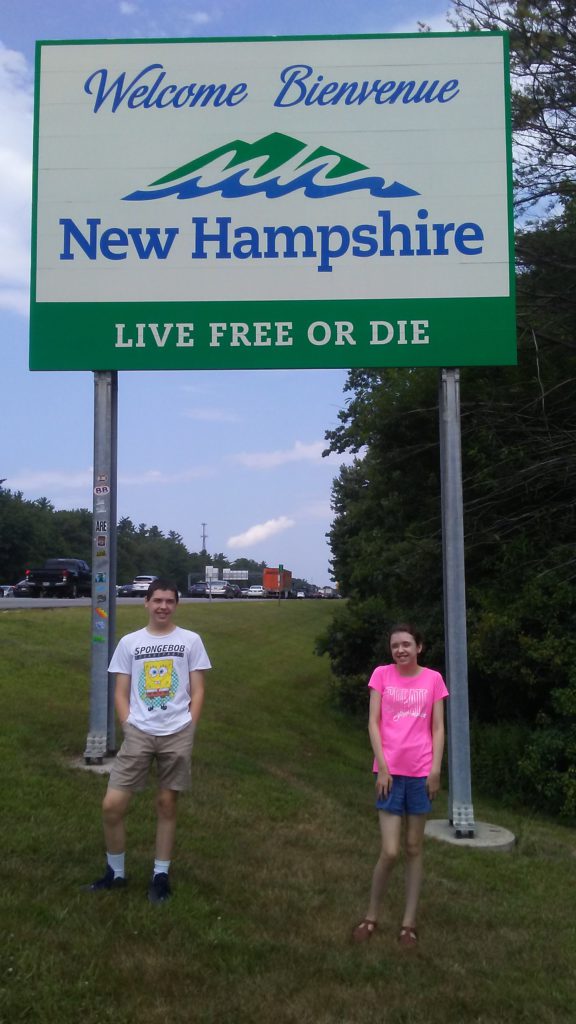 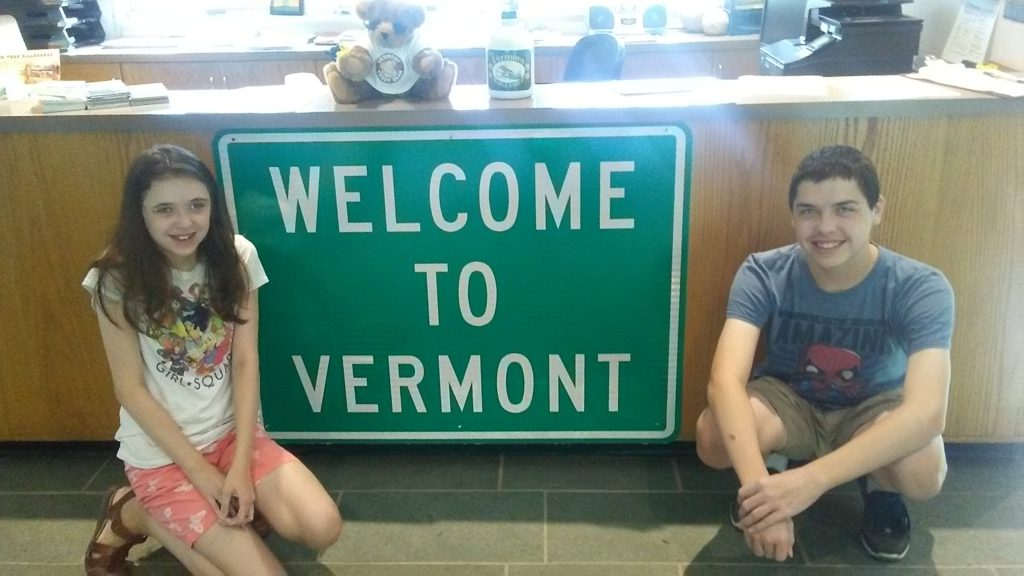 If you have any comments or questions please feel free to leave them below.